Nathan Aguinaga, Author of — Wake Up, You’re Having Another Nightmare – Episode 2097

Retired Master Sergeant, Nathan Aguinaga, returns to the Success InSight Podcast to chat about his latest book, Wake Up: You’re Having Another Nightmare. This the third and final installment of Nathan’s 3-book series, describing his military and civilian life. 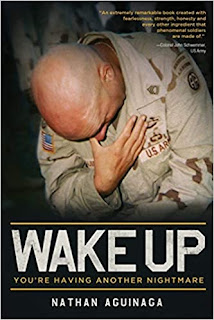 Nathan first joined us for Episode 13 this year, when he introduced us to, Division: Life on Ardennes Street, which is about his ten-years’ experience in the 82nd Airborne Division.

Nathan joined us again for Episode 50 when he introduced us to the second book, Roster Number Five Zero, which was about his personal experiences, from beginning to end, of attending the toughest combat leadership course in the military — the US Army Ranger School.
In, Wake Up, You’re Having Another Nightmare, Nathan writes about the personal experiences of he and his wife in dealing with the posttraumatic stress disorder that he was diagnosed with while he served his last year of a twenty-year career in the US Army.
After retirement from the Army in 2010, Nathan earned a Bachelor’s Degree in Liberal Arts and a Master’s Degree in Education Guidance Counseling. During the school year, He is a substitute teacher at the local middle and high school. He resides with his wife Jessica, he has a daughter in college, and a son getting ready to graduate high school.
Click here to find Wake Up, You’re Having Another Nightmare, on Amazon.
Click here to find Roster Number Five-Zero on Amazon.
Click here to find DIVISION: Life on Ardennes Street on Amazon.
To learn more about Nathan, visit him on his website at https://www.naguinaga.com, or visit him on the following social sites:
Facebook
Twitter
LinkedIn
Koehler Books
The SuccessInSight Podcast is a production of Fox Coaching, Inc. and First Story Strategies.